The idea for mutations stemmed from a series of existing machines that I had constructed, which were built to disrupt types of communication. For the commission I redeveloped and extended aspects of these systems into a new machine, which was designed to collect and interpret conversations between people and mistranslate them as text. The machine consisted of a series of five microphone headsets, which were networked together using timers and switches and relayed conversations between different people. These were mounted on tall chairs that had been designed to place the people using the headsets at the same eye level as those standing around them. All the conversations that passed through the microphones, as well as ambient sounds, were relayed through an untrained voice recognition system, which mistranslated the audio input and projected it onto a painter’s canvas as text. The canvas was set vertically on a steel plate and moved backwards and forwards along a curved aluminium track that stood ten inches off the ground. Each end of the track had a pulley system, driven by a single motor and a set of guiding brackets that directed the canvas along the length of the rails. At the venues where the track was used it was arranged so that the projected text was visible at the point where the moving canvas passed in front of it. For the rest of the time the text was projected into the space beyond the track, often out of focus and illegible on a wall. 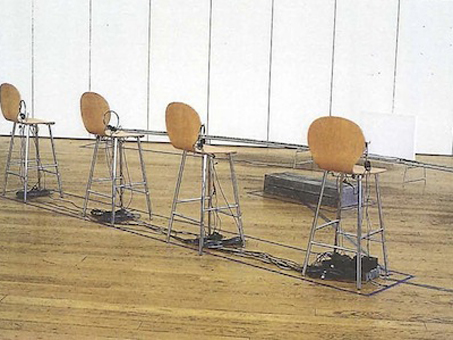 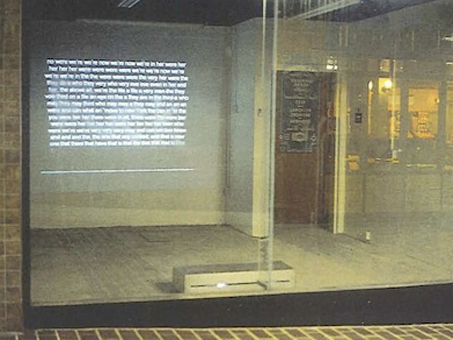