A Function of Sculpture
2003

Function of Sculpture ran simultaneously in Ashford, UK and Cape Town, South Africa, in August 2003. In Ashford a large site-specific work was installed at the former Croford Works on Dover Place, while a single installation was visible in County Square, the town’s shopping precinct. Meanwhile in Cape Town, South Africa, a work was installed relating to the exhibition in Ashford. The work, titled 85° 4’ 24” consisted of a simple bright orange plumb-bob, usually used to measure parallel vertical lines, that with another identical plumb-bob installed in Ashford created an angle the same as the work’s name. The artworks developed for the exhibition intervened in the spatial dynamics of their sites, preventing or restricting movement, and presenting registers against which to measure an experience of time. 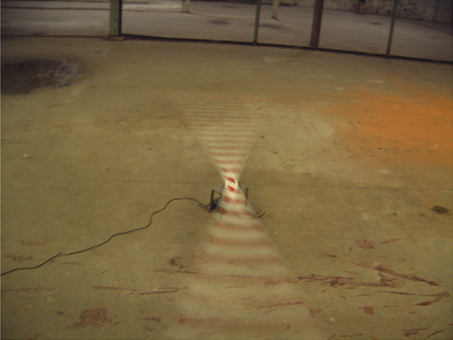